Misty Hiking in the Durmitor 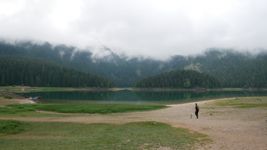 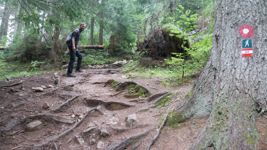 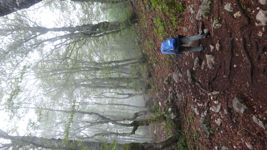 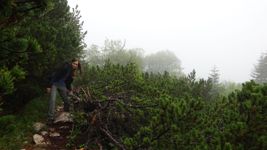 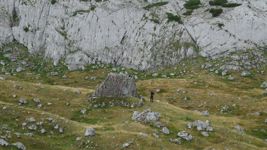 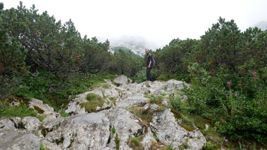 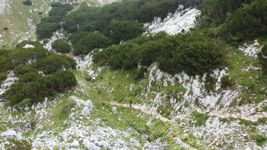 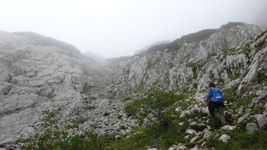 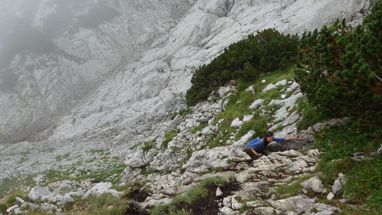 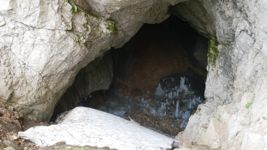 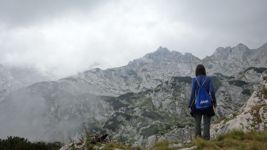 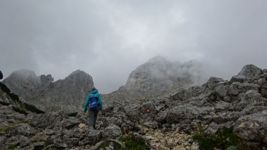 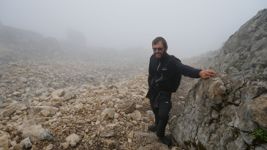 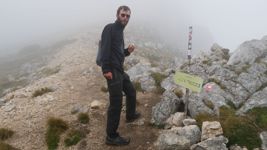 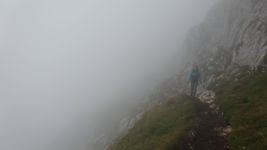 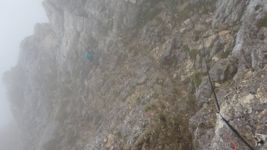 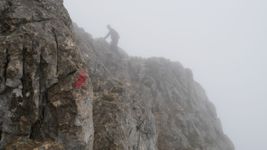 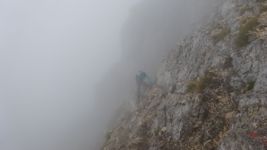 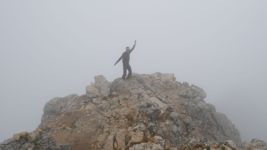 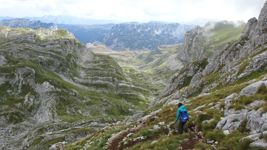 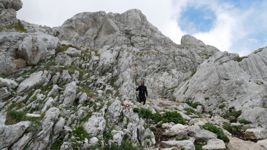 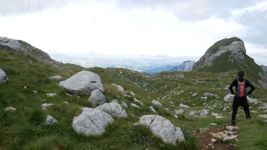 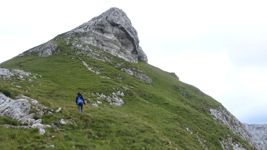 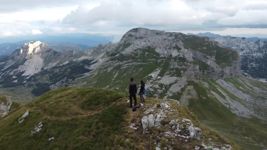 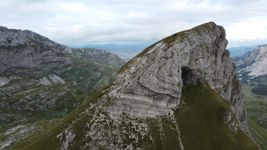 That the route through the triple consisting of Piva Canyon, Durmitor Massif and Tara Canyon is perhaps the most beautiful and spectacular route in the Balkans, this I already knew from my Istanbul Tour 2013

. And also back then we had taken a rest day in Žabljak, the only notable town on the Durmitor, where it is not too hot even in high summer. However, in 2013 we actually used the rest day as a rest day, lounging around the guesthouse all day and using the access to the supermarket and kitchenette to feast.

And so Belinda and I wanted this time not only to repeat the Piva-Durmitor-Tara triple by bike, but to use at least one of our two scheduled rest days for a hike through the massif - whereby the term ‘rest day’ however, was led ad absurdum, as it should turn out.

We looked at our digital map* in hiking trail mode; from our guesthouse in Žabljak, the Black Lake, the Ice Cave and the Bobotov Kuk could be connected roughly in a more or less straight line via hiking trails. Back we wanted to hitchhike from the Sedlo - the pass of the road we had already come over by bike. This route would be about 16 kilometers long.

We start at 07:30 a. m.; we speculate to be back in the guesthouse already in the early afternoon to be able to finish this article immediately.

After 45 minutes we have already covered 3 kilometers - so it can go on, we think to ourselves - and reach Black Lake. Probably the dark conifers that grow on the steep slopes around the lake and are reflected black in the water gave the lake its name. Although just as black as the forest around it, it is probably a good landmark from the air, at least the British chose it during World War II as a landing site for their paratroopers pledging support to Tito’s partisans for the Battle of the Sutjeska (see Podcast Episode 6, in German only).

3 kilometers in 45 minutes - so it went on by no means. Behind the lake, located at 1420 meters above sea level, the path leads steeply up the aforementioned wooded slopes. Everything is wet and damp from the night rain. At 1650 meters we enter a white wall - we have reached the cloud line. At a viewpoint at 1720 meters, which otherwise probably allows one a picturesque view back down to Black Lake, we see only the trees within ten meters of us and then white.

At this altitude, the forest now gives way to conifers only up to two meters high, which do not grow like trees but rather like bushes. The path leads repeatedly through the middle of the branches, so that the damp bushes wipe their water on us from all sides. Sometimes holes are briefly torn in the clouds around us and give an idea of what grandiose views would be possible here in better weather.

To get to the Ice Cave at 2200 meters, we have to use our hands to climb for the first time. The cave protrudes perhaps thirty meters into the mountain, is perhaps five or ten meters high and leads steeply down. Glacial ice has formed on the steep floor, protected from the sun by the cave, and persists through the summer. At the bottom of the cave, water dripping down from the cave ceiling has formed some stalagmites of ice. Accordingly, it is cold in there and when we climb out again the temperature contrast is magnified, because actually the sun shows up briefly and warms us up again!

At 01:00 p. m. we make after about 10 kilometers (that with the return in the early afternoon becomes slowly difficult) lunch break at a further viewpoint and this time one sees actually down into the stony, treeless, only by footpaths crossed valleys and the surrounding 2200 meters, 2300 meters high rocky summits.

As we walk towards the summit, it hides behind clouds again and soon it also generally closes in and a light drizzle starts. It is cold, but hiking over hill and dale and finally up the slope to the saddle next to Bobotov Kuk is strenuous enough to keep us warm. Even as the rain subsides, the wetness on the scree doesn’t make the climb any more pleasant. It is slippery and the hands, which have to be used every now and then, soon become quite muddy. Increasingly, the legs report that they are not used to this kind of load and do not agree with it. Gradually - but faster than I would like - the agile hiking and climbing turns into a laborious trudging uphill. When we arrive at 14:30 clock after a total of 12 kilometers on the 2340 meters high saddle we are again immersed in the cloud cover and a cold wind sweeps over the edge. Slowly it becomes foreseeable that an ascent of Bobotov Kuk would not be rewarded with the hoped-for view. But maybe we can get out above the clouds? Anyway, we are here now and the summit is only about 500 meters away, for which, however, according to the signposts, one needs an hour. We are also not sure whether we can master the path of the black category without climbing equipment at all - especially in this weather - but we want to see in any case how far we can get.

So we turn right at the saddle height and tackle the summit. At first the path follows the ridge, but after a short time it avoids the summit to the left and thus leads past the highest point at first - and along the steep slope. The path is not wider than thirty centimeters and directly to the left of it, the almost vertical ground disappears after a few meters in the endless white of the clouds. From the map we know that only after 300 meters it flattens out a bit and after another 400 meters it reaches a lake and thus the bottom of the valley. It is like balancing on a thirty centimeter wide (slippery, because wet) wooden board: If the board is lying on the ground, it is no problem at all, but if you fix the board 300 meters above the ground the whole thing becomes interesting.

The dense clouds swallow a lot of sunlight and it is relatively dark. Unfortunately they do not swallow the cold wind. Again and again rocks protrude from the right into the path and push you even closer to the abyss or have to be climbed over completely. Every now and then people suddenly appear from the clouds in front of us, some of them with climbing helmets, wish us all the best and are swallowed up by the white wall behind us again a few seconds later. Quite a few of them make an exhausted impression and seem to want to get back down as quickly as possible. Two parents hurriedly help their perhaps ten-year-old, crying son to descend, who was obviously overwhelmed with the situation.

Finally, the path turns to the right and now leads directly to the summit again. This is where the real part of the climb begins: The damp earth-gravel mixture of the path gives way to bare rock, hiking finally gives way to climbing. The hands find mostly quite good grip in the rugged rock, but the feet often stand a little unsteady, because the moisture reduces the friction here on the rock even more than already before on the path. Would be helpful if my legs were not already quite exhausted and powerless at the beginning of this climb, I think to myself. We briefly consider turning back again, but ultimately decide that despite the somewhat queasy feeling, the rocks are rugged enough and continuing is thus sufficiently safe.

200 meters stretch of slippery rocks still lie ahead of us. For half an hour we slowly feel our way forward. Then we stand at the top, at 2523 meters. The view now over the entire 360°: White! We are standing on a small rocky island, perhaps ten by ten meters, in a sea of impenetrable white. We pose for photos on different sides of the island in the different directions, ending up with many virtually identical images: Belinda on stone against white, Tizian on stone against white.

The hour from the ridge to the summit was a reasonably good estimate. The descent still worries us a bit. Now people can probably see that we are glad to be back on the ridge. But the descent works surprisingly well. At 04:20 p. m. we are back on the ridge. Ahead of us are now another 5 kilometers to the hitchhikeable road. The planned total of 16 kilometers have somehow - possibly the path on the map runs a little straighter than in reality - turned into 18. We still have to lose a net of about 400 meters of altitude, which, as we know, takes similar time when hiking as to gain the same altitude.

Without the adrenaline, which still covered the greatest wailing of the legs when climbing Bobotov Kuk, I now feel the leaden exhaustion of the muscles with every single step. At least the weather is now really good again, only the top of Bobotov Kuk is still stuck in a cloud (fortunately - not to think if only shortly after our descent the view from up there would be impeccable again!). To the exhaustion comes a little disappointment that we have not chosen another of the many peaks presented against a clear blue sky for the ascent.

At 06:22 p. m. - only one more kilometer separates us from the road - a path forks off to the left, ending after only 300 meters and 100 meters of altitude on the top of 2200 meters high mountain Uvita Greda. There are some higher mountains in sight and yet Uvita Greda is relatively freestanding and also the only one that might be reachable for us at this time and given our condition. We decide to take the plunge. After a few minutes, the path ends at a steep, rocky slope with steel ropes as climbing aids. We pull ourselves up on it and reach the top of the mountain faster than we would have thought possible. This time we’re not standing in a cloud and the view is quite nice. So the undertaking here in Durmitor National Park was not entirely misty after all.

Only three quarters of an hour cost us the Uvita Greda. At 07:30 p. m. we stand after 18.5 kilometers on the road and now only need to find a ride. When planning the hike, we feared that this would be one of the most difficult parts of the trip. But the French tourists, who are just getting into their car ready to leave when we arrive at the road, let us go with them without hesitation.

Back in our bed in Žabljak, I feel my legs like never before after a day of cycling. Once again I realize the benefits of the continuous, even moves of cycling. Belinda seemed relatively fit while hiking until the end, but she should still complain about sore muscles from hiking, especially in the next few days on the bike, when my legs were already pedaling again very grateful not to have to walk anymore.

* We use the maps from OpenAndroMaps.org

with the app Locus Map 3 Classic

; here, the map display can be optimized for cycling or hiking, among other things.